In the News: Propane Consumers Stay Warm While Natural Gas Faces a Crisis 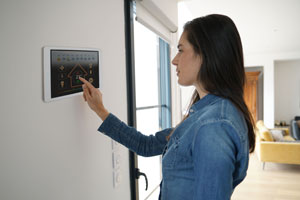 Consumer surveys have shown that people like heating their home and water with propane because they know they will have a reliable supply of propane on hand whenever they need it. Having a propane tank on their property gives them the ability to store a plentiful supply that’s always ready for immediate use.

Natural gas customers don’t enjoy security like that, as recent events have shown. During the last week of January, Arctic air—often described as the polar vortex—descended on the Midwest, sending demand for all heating fuels skyrocketing.

The fire at the compressor station was quickly brought under control and no injuries were reported. However, all gas flow from the station was shut off, and the utility had to start directing its natural gas supply from reserve storage areas and neighboring gas utilities in an attempt to keep up with demand. But a crisis was quickly brewing.

“Turn down your thermostat”

The incident led to the gas utility pleading with customers to turn down their thermostats to prevent a serious natural gas shortage. Some manufacturing plants with high natural gas usage even had to cancel work shifts because of the crisis. A gas utility in Minnesota also made a similar conservation request because of the extreme cold. (Temperatures had dropped to over 30 degrees below zero in some parts of Minnesota).

The situation became so dire that the natural gas utility and the Michigan governor sent out alerts on Facebook, radio and TV. They even made state-wide emergency automated phone calls urging all residents—even those who didn’t use natural gas—to cut back on their energy usage.

As if that wasn’t enough, another large utility in the state asked their customers to reduce their electricity usage because of the brutal cold. The utility reported that while its plants were operating without problems, their system is connected to energy grids in other states, as well as Canada, all of which were experiencing issues because of the extreme weather.

While the gas shortage lasted only as long as the length of the extreme cold, the incident once again reinforced the power of propane, especially in terms of supply and reliability.

Propane has a distinct edge over natural gas because of the way it’s processed and transported. After propane gets compressed into a liquid, all of this liquid petroleum gas (LPG) gets stored inside large tanks until the local propane company delivers it to the on-site supply tank at a home or business.

The liquid propane changes to gas before it leaves the on-site storage tank, getting released slowly and safely through pressure regulators. Compare that to the delivery system of natural gas. If an underground natural gas pipeline gets damaged—or other problems occur- hundreds and even thousands of customers may lose their supply until repairs get done.

Other reasons to choose propane over natural gas

It’s no secret that natural gas is the leading home heating source in many parts of the country, yet here is something most people don’t know: many of the benefits of natural gas are also very similar when using propane.

Whether it’s a super-efficient furnace, unlimited hot water, temperature-precise cooking stoves or reliable backup home generator, you can count on all of these benefits in your propane-powered home in the same way people do in homes supplied with natural gas.

With that said, here are some more key advantages when comparing propane to natural gas.

If there are no gas pipelines installed near your home, you can’t use natural gas. Propane businesses serve customers in every one of the 435 U.S. congressional districts.*

Most propane suppliers have several ways to ensure that you will always have plenty of clean, dependable propane on hand, with programs like automatic delivery, prebuy and other plans to suit your needs. Unlike natural gas, propane customers can contract for and store their energy supply on-site for ultimate security.

Propane is a liquid under pressure for safe transport, and is handled by highly trained professionals using equipment and techniques that are regulated by authorities at federal, state, and local levels. If a serious problem occurs with a natural gas pipeline, the situation can turn tragic, as we saw last summer in Massachusetts.

In most cases, a propane line can be fed into a home at many different entry points, as long as there’s a tank nearby (while there are some requirements for distance from the home for a propane tank, they are not overly restrictive). Easy routing may not be true with a natural gas line.

Environmental issues have been raised about allowable levels of methane leaks coming from old underground natural gas pipelines. (Methane is a greenhouse gas and the main component of natural gas.) In its original form, propane is not a greenhouse gas and it’s considered a “green” fuel because of its low carbon content. And for customer safety and security there are no allowable leaks with propane.

As a fuel, propane is also safer

Propane has a much narrower range of flammability (minimum and maximum burn temperatures) than natural gas; propane will not ignite when combined with air unless the ignition source reaches at least 920°F.

Read more about the benefits of propane.